Review: Do You Want to Start a Scandal 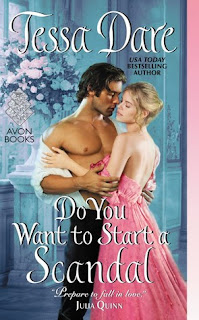 Do You Want to Start a Scandal is the 5th book in the Spindle Cove series by Tessa Dare.  While you can read this series out of order, it would still be my recommendation to read in order.  Only because the characters continually reappear in each of the books, but each book does have its own stand alone romance.

In this installment Piers Brandon, who is a spy for the crown, is investigating a potential recruit at a garden party.  While snooping through the home owner's study, a young woman, Charlotte Highwood takes him by surprise.  One thing leads to another and they are found alone together.  To minimize the scandal, Piers agrees on an engagement to her.  He really is taken with her and finds himself wanting to convince her, marriage to him is a good thing.

I found Do You Want to Start a Scandal to be just what I needed at the moment.  It's lighthearted, charming and sweet.  Tessa Dare once again delivers another delightful addition to the Spindle Cove series.  Charlotte is adventurous and outspoken without being brash and rude.  She really is rather sweet and the reader quickly falls under her spell just as Piers does.  She feels bad that Piers is getting saddled with her all because they were found together alone.  Piers on the other hand, thinks this might be his lucky day and sets out to make sure he seals the deal.  What follows are a series of fun scenes.

I really don't have any complaints about the book.  Its not very deep or heavy, but I think that is in its favor.  I would highly recommend this one if you need to escape from reality for a while.  I mean who wouldn't need that right about now!  Another enjoyable story by Tessa Dare.
Posted by Jill D. at 11:16:00 AM
Email ThisBlogThis!Share to TwitterShare to FacebookShare to Pinterest
Labels: Grade B, Historical, Tessa Dare

I really enjoyed this book. I thought Charlotte was such a likable character and I loved seeing Piers fall in love with. He was so confused and so annoyed, I just loved it to pieces.

I will need to think about this one, when I am in the mood for something light hearted. The characters sound wonderful here.