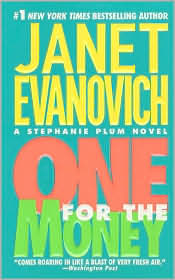 This series isn't exactly straight romance, but I have enjoyed it none the less and there is some romance to it. At my library they shelve it in the mystery section. Stephanie, the heroine of the books, is a bounty hunter. Each book has self contained mystery to it, but Stephanie's social life progresses over the course of the series. I think each book could be read on their own, but the whole reading experience would be enhanced if the books were read in order.

This series is very popular in mainstream and has made the New York Times best seller list several times. It is told in the first person and Stephanie has a very fun outlook on life and is outrageously funny. So far I have only read the first two books in this extensive series, but I have enjoyed both very much. I have heard complaints from some readers about the unresolved love triangle between Stephanie and her two men, Ranger and Joe. I will have to see for myself what all the fuss is about. I might update this later as I make progress in the series. Until then, I'll have to reserve judgement and just enjoy the ride.

*UPDATE* I have made it to the ninth book so far and I am very much enjoying this series. I even have my mom reading it! So far my two favorite books would be Four to Score because of Sally Sweet the cross-dressing transvestite and To the Nines when Lula and Stephanie travel to Las Vegas.

I just started reading this series...and I LURVE it. I read the first four when I was home sick two weeks ago! And it's taking all of my will power to not run to Borders and buy the rest of the books.

Just thinking about this series has me LOL'ing. :)

Recovering, They are fun, aren't they? I am going to start on the third one soon.

Seneca, These are great! I don't know who introduced me to them, but I am sure glad they did.

Love the start of this series... but I've given up at 12... It started getting darker and I got tired of the love triangle.