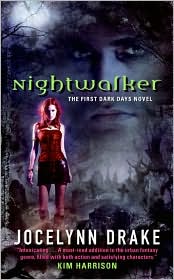 I recently stumbled on The Dark Days Series by Jocelynn Drake. It is straight urban fantasy narrated in the first person point of view by Mira, a centuries old Nightwalker, otherwise known as a vampire. Mira has carved a niche for herself in Savannah, Georgia after finally breaking away from her European makers. She meets the infamous vampire hunter Danaus and learns of an impending war between the Nightwalkers and the Naturi. She must team up with Danaus if she is to defeat the Naturi and save Nightwalkers and humans alike.

This is not a romantic series, although there is sexual tension between Danaus and Mira. For the most part, the focus is on the war between the Nightwalkers and the Naturi, but there are other supernatural creatures that exist as well, such a werewolves and warlocks. Not to mention it isn't entirely clear what Danaus is. Danaus doesn't fall into any category very easily and has unusual powers.

So far I am really enjoying this series not because the plot or storyline is very original, because let's face it. It's not. I am enjoying it because of the execution of the story with the wonderfully written character, Mira. She is constantly questioning the right/wrong or good/bad of different creatures and what she must do in order to survive. She also many times must decide what is the best for the majority of her people and not just for herself. These lead to some very difficult choices to make and broadens the defining line between black and white. I really enjoy this philosophical aspect to the book. It adds just the right amount of depth without becoming too preachy.

I am of the opinion that this series should be read in order, as each of the books build off of its predecessor.

Series Reading Order:
The Dead, The Damned, And the Forgotten (prequel to Nightwalker releases August 25, 2009 in the anthology Unbound)
Nightwalker
Dayhunter
Dawnbreaker
Pray for Dawn
Wait for Dusk (releases August 2010)

Posted by Jill D. at 11:15:00 AM
Email ThisBlogThis!Share to TwitterShare to FacebookShare to Pinterest
Labels: Jocelynn Drake

I really want to read this book..I almost bought book two the series today but I figured I might as well read Nighwalkers first to make sure I like it. Based on your review I think I will :)

Dottie reviewed this series a few weeks ago and I determined that they're just not my cuppa. While I do read UF, I need guaranteed strong romatic elements, and Drake doesn't seem to supply that in her series.

I hope you're having a great day!

Mandi I think it would be better to read the first book, because the second book takes place right where the first one left off. It could be confusing if you don't read Nightwalker.

VFG - Hey, I realize that this might not be for everyone, especially romance fans. That is why I like these series posts to keep readers in the know. I'll keep you informed if the romance picks up later in the series :)

So, so, so? Did you read book 2? LOL :) I almost bought it yesterday and told myself to wait for your review :P

Nath - I did read the second book and I will be posting the review shortly. It's on shelfari now, if you don't want to wait :)

I love Jocelynn Drake's voice throughout her books; sexy, determined, and resilient. Nightwalker was one of my top picks in 2008, Dayhunter extends the story, and Dawnbreaker is a fantastic addition to the story, leaving the door wide open for more fantastic tales from this young author. If I could read this story has it is produced, I would. The romantic aspect in these books is mostly related to blood exchange between Mira and her angels/family/and a few shapeshifters that she is attracted to. The sexual tension between Mira and Danaus is the true draw for the romantics to this series. I loved it. I'll be back to read your thoughts on Dayhunter and Dawnbreaker. SciFiGuy has an excellent review as well.

Thanks for the excellent review!

Hey Dottie - Thanks for stopping by. I noticed that you scored an advanced copy of Dawnbreaker, you lucky dog you! I only skimmed the review because I didn't want to learn to much about the plot. Glad to see you are enjoying this series too!