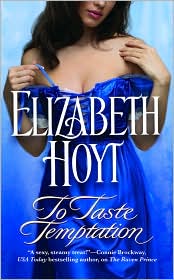 Elizabeth Hoyt made her big debut into the world of romance in 2006 with the award winning novel The Raven Prince. She was voted best new author and The Raven Prince won for Most Luscious Love Story in AAR's 2007 Readers Choice Annual Poll. I am very excited to report that Ms. Hoyt has started another series. This time it's a quartet called Legend of the Four Soldiers.

This series is about four soldiers that fought in the French and Indian War. Each book takes place after the war when the soldier comes home and has to integrate back into society. Luckily for him he finds his lady love and lives happily ever after. Each soldier has his own stand alone love story, but there is an overall mystery that runs through the series and hopefully will come to fruition in the final installment. I happened to read the third book first. I didn't feel lost in reading about the romance, but I could tell that I didn't understand all the details surrounding the war mystery. It would be a judgement call by the reader on whether or not to read the series in order.

Series Reading Order:
1. To Taste Temptation
2. To Seduce a Sinner
3. To Beguile a Beast
4. To Desire a Devil (releases November 09)

I have read this series in order as they have been released and I do think that it helps your understanding of what Spinners Falls is all about and about the legacy of the incident on people involved was. Having said that, I didn't really like the heroine in To Taste Temptation all that much, so the better books for me were books 2 and 3.

I was very excited to read about plans for the next series in the latest newsletter from Elizabeth Hoyt. She is now one of my auto buy employees.

I have heard so many good things about this series. They all grace myself but I first want to read: The Serpent Prince, yes, I am that way behind in reading her books *eek*

I recently received the first two books in this series. Can't wait to start!

I've read Seduce a Sinner and enjoyed a few other of her books... but I'm not a die-hard fan of hers. Ah well... :P

Marg - I have heard people say that To Taste Temptation was their favorite because of the "earthy" hero. I can't wait to start that book, myself.

I kind of gathered that I was missing some relevent information about Spinners Falls. I didn't feel totally lost, though.

Mandi - I hope you enjoy them. I will be starting on To Taste Temptation shortly, probably in the next week or two.

Nath - I really like her writing style. I think it is subtle, yet clever and she really weaves a good story with good characters. Hoyt is a solid story-teller. I guess I have officially jumped on the fan bus!

Leontine - I just read The Serpent Prince in April, so don't worry about it! Too many books, and not enought time to read them all!

I find this whole series to be ABSOLUTELY TASTY. I picked up this author based on a blog recommendation and I haven't been sorry at all.

She also has a free romance over on her website, which I recommend you check out.

And I really cannot wait until this fall, when the last book in the series comes out!

Kate - I didn't know about her free read on her website. I'll definitely be sure to check it out.