Review - Agnes and the Hitman 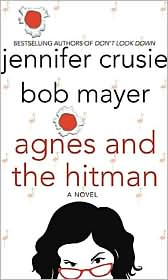 Agnes does not need trouble. She has a wedding for her best friend’s daughter to prepare for. She is cooking in her kitchen when a thug comes in and threatens her dog. Agnes, not one to shy away from violence, hits him in the head with a frying pan. A struggle ensues and the thug ends up in her basement dead, after he falls to his death. Her long time beloved friend Joey sends his nephew Shane to protect her. Shane is a professional killer. While involved on a mission of his own, he heads down to the small southern town of Keyes to protect Agnes as a favor to his Uncle Joey.

Let me start off by saying that I am not partial to romances where the hero or heroine is engaged to another at the beginning of the story. Since Agnes steals the show and Crusie is an awesome writer, in this book, it wasn’t an issue for me. Agnes is unlike any heroine I have ever read before. I am not sure how other people will react to her, but I loved her. She will not hesitate to use violence to punish those who have wronged her. Even though Agnes is scary when mad, she can also be nurturing at other times. The best way for her to nurture is through her cooking and she is a great cook. Part of my enjoyment of the book came through the scenes that described what Agnes was making for breakfast or other meals. There were quite a few of them, too. For those of you readers who love food, you will be slobbering over those scenes.

I was worried about the mystery overshadowing the romance. It does to a certain extent in this story, which is why I rated this book a B+, but it’s a very involved mystery and, believe it or not, makes the story what it is….great. There are quite a few twists and turns concerning the suspense part of the book that keeps the reader guessing right along with the characters.

Shane takes a backseat to Agnes. He sort of blends into the background a bit. As far as heroes go, I thought he was perfect for Agnes. He was trustworthy, which Agnes desperately needed. He was calm and sedate, where as Agnes was crazed and insane. They made a really great pairing. Beyond that, there is quite a cast of characters, all interesting. Brenda, the grandmother of the bride, was a little over the top, but that can be overlooked. I really enjoyed this story. It was funny, with an entertaining mystery and a sweet romance all at the same time. Good job, Jennifer Crusie and Bob Mayer.

I really liked this one. I was very disappointed with their first endevor (Don't Look Down) but I thought Agnes was great!

I loved this one. So funny. And I loved Agnes too, though that type of character (slightly crazy and a little self-obsessed) usually drives me nuts. But I loved her. She's such a nutcase, but a lovable one. :)

Mollie, I too was disappointed with Don't Look Down, which is one of the reasons why I waited so long to read Agnes and the Hitman.

Jennie, Agnes was a nutcase, that's for sure. But, I think Crusie was able to balance her out with a calmness that came when she was cooking. Something about that combination really worked for me. (It was probably all the descriptions of the yummy food).

This sounds interesting. I was going to read it then I changed my mind but your review makes me want to read it again. Good job.

DLD was one of the first books I reviewed on my blog, and I thought that the characters dominated the plot a bit more than they should - the plot was convoluted and a bit confusing, wrapped around so many strong characters. But that's not to say that I didn't like it. I haven't yet finished AAHM since it's not in paperback yet (is it?) and I've been forced to read it piecemeal at Powell's over tea. (www.powells.com for those of you not fortunate enough to be near the City of Books!) I anticipate liking it. I've never not liked a Jennifer Cruisie book, to be honest.

Glad you enjoyed the book :P

Kate, You should try and see if your local library has this book. That is what I did, because let's face it, hardback books are expensive. This book is classic Crusie, so I know you will enjoy it.

I am with everyone above, I was very unhappy with Don't Look Down. I am glad to hear Agnes has redeemed JC's writing. I tried to get it at the library but some other romantic soul already had it checked out. Next time!!!

Oh, I hope you don't mind, but I added a link to your site on my blog. I just started my own book blog (cause there aren't enough of them already) ;) Feel free to stop by and check it out. All I have right now in an intro post, but more will be coming soon!

Hi Shannon! Welcome to my blog. I actually just started my blog in Januaray so I am a newbie too! Thanks for adding me to your website, I don't mind at all. I look forward to reading your posts. You should definitely read Agnes. It's really funny. Crusie is at her best again.