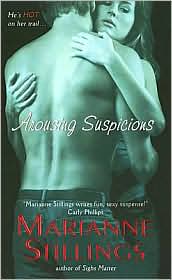 Tabitha March is a psychic dream interpreter. When she makes physical contact with a person while they recount their dream, a detailed vision of their dream will appear to her. She helps this person determine what it is that the dream represents to them. One of her clients has been having dreams that he murdered someone. Then one of his victims actually turns up dead for real. Tabitha goes to the police and meets inspector Nate Darling. Nate, of course, is a skeptic. However, with irrefutable proof, he can’t help but be suspicious of Tabitha herself.

The overall feel for Arousing Suspicions is humorous and light-hearted. Nate and Tabitha both have many witty quips and sarcastic comments that cracked me up. Both characters have broken pasts that they want to try and overcome. They are easily likeable and are a good match for each other.

The suspense plot is well detailed without being grotesque. I really appreciated that. The mystery is resolved at the very end and I never saw it coming who the villain was surrounding the murders. I will admit though, that when I watched Scooby Do as a child, I was never able to figure out who the bad guy was either. Keep that in mind. If you are really good at figuring out mysteries, then maybe this one won’t stump you like it did me.

This book was a quick, enjoyable read. My only complaint is that I would have liked for the story to have been longer.

seems like you enjoyed the book more than I did :) I think in the end, this book is quite forgettable. Also, I wished Nate would have believed Tabitha earlier in the storyline.

Quote: "I will admit though, that when I watched Scooby Do as a child, I was never able to figure out who the bad guy was either."

LOL, almost spilled my coffee over the keyboard.

Nath, I found the humor and the mystery to be quite entertaining. I can see where some people might just be ho-hum about it. There didn't seem to be a lot of passion or angst.

Ana, You liked that, did you? Well, I aim to amuse!

I was quite impressed with this book too. And the next one - with Nate's brother is just as good.

Kristie, Yep, I will be reading the next book. I am looking forward to Ethan's story since he acted like such a hard ass in this book. It should be interesting.