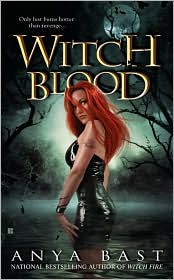 Isabelle Novak, a water witch, has been hunting down the demon who viciously murdered her sister Angela, the one person she has allowed an emotional attachment to. Since the Demon has eluded her, she settles for destroying the warlock (a witch turned bad) who allowed the demon into this world, Stefan Faucheux. She poses as his latest play thing, luring him into her clutches. Finally, she gets him where she wants him - with his pants down; a very vulnerable position, indeed. Yet, right when she has him in her grasp, Thomas Monahan snatches him away and imprisons Stefan at Gribban. Thomas, head of the Coven, notices the desperation surrounding Isabelle. He convinces her to stay at the Coven and join them in tracking down the demon.

Witch Blood had a more serious feel to it; lacking the humorous feel Witch Fire had. In Witch Fire, the heroine didn’t even know she was a witch. So we learned about the new world and her new powers right along side her. In Witch Blood, Isabelle and Thomas are already well established in the use of their powers. There is less written about how they use their powers. What they do discover, the hard way, is that their magic is useless on the demon they are hunting. Therefore, they have to discover what its weaknesses are. We are introduced to more world building as they research the demon. We also meet many new characters in the Coven. Adam, the ‘man-whore’ (what Isabelle calls him in one scene), is a particular favorite. Theo and Micah are interesting as well.

Isabelle is they type of heroine who grates on my nerves. She has had a hard past and because of it, she pushes everyone who gets too close to her away. After two-thirds of the book, this really got old. I thought for a moment in the middle of the story we were going to see some growth, but it didn’t come well until the end. Thomas, bless his heart, knew what he wanted and never took no for an answer. He could read Isabelle like a book, and just bulldozed over her crap. I liked him. As a character, he was much better than Isabelle. One disappointment, though, was we were given no background on him. Isabelle has a fully developed back story, where Thomas has one sentence. It would have been nice to have a better balance here.

I would have given this book a lower grade if it had not been for the kick-ass twist at the end of the book. I totally did not see this coming. I give my congratulations to Bast for her ingenious imagination. The last forty pages had me on the edge of my seat. I couldn’t turn the pages fast enough. That being said, I can’t wait to read the next book in the series and see what direction Bast leads us in. It is sure to be interesting.

The Good, The Bad and The Unread

Posted by Jill D. at 9:00:00 PM
Email ThisBlogThis!Share to TwitterShare to FacebookShare to Pinterest
Labels: Anya Bast, Grade B, Paranormal

Oh wow, I've never been here to your blog but I love what I see...this is a great looking blog and your posts are thorough and entertaining.

Interesting :P I bought this while I was on the trip... however, I still haven't read book no.1. Is it necessary to read the first book in order to understand?

Also, I think the H/H with a past pushing away everybody, it's been a bit overdone. Sigh.

Hi Rowena, Welcome to my blog! Thanks for the compliment, I am glad you like what you see!