Review - To Beguile a Beast 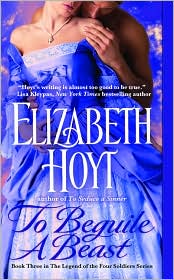 Helen Fitzwilliam was once young and in love with the Duke of Lister. He succeeds in seducing her and making her his mistress. She has two children by him, Abigail and Jamie. The Duke is the type of man who will never let what he thinks of as "his" go. Unhappy with her life as the Duke's mistress, she runs away with her children. Helen runs from London to the farthest reaches of Scotland with her friend Lady Vale's help. She has arranged for Helen to be the housekeeper for Sir Alistair Monroe. Alistair is a recluse who has never left his castle since he returned maimed from the French and Indian war in the Colonies. Helen arrives on his doorstep with her children, desperate with no where for her to go. Alistair is willing to allow her to stay one night, but then she and her children with have to leave in the morning. Only, somehow Helen and the children worm there way into Alistair's heart and a new adventure begins.

To Beguile a Beast is another stellar work of art from Ms. Hoyt. This time the novel is a variation on Beauty and the Beast. Alistair is quite prickly at first, and I think that he has good reason for it. Alistair really is horrifically scarred. He is missing one of his eyes and a couple fingers, plus one side of his face has extensive burns. Because his looks frighten many people, he has restricted his existence only to his castle and the grounds surrounding it. He lives in a huge rundown castle with only one man servant. When Helen and her children come into his life, he starts to live again.

Helen is good for Alistair. Up to a certain point, she doesn't allow him intimidate her. She forces Alistair to join the land of the living. When Alistair gets wind of Helen's problems, he takes it upon himself to help her. He derives a clever way to defeat the Duke (without bloodshed). This brings me to what I really enjoy about Ms. Hoyt's writing style - the characters are very cunning and there is a resourcefulness to them that entertains immensely. I also find the humor to be very subtle, yet prominent. The humor isn't so much as laugh-out-loud funny, but more of a laugh that sneaks up on you and makes you chuckle under your breath.

Posted by Jill D. at 3:53:00 PM
Email ThisBlogThis!Share to TwitterShare to FacebookShare to Pinterest
Labels: Elizabeth Hoyt, Grade B, Historical

I've enjoyed all of Elizabeth Hoyt's books so far and I'm looking forward to this one. I'm thrilled that a certain character will be the hero of the 4th one, 'To Desire a Devil'.

I haven't read this one yet, but I intend to. I really liked the first one in this series.

I only have one of hers in my TBR & I think I'll be hunting for others of hers very soon. Her reputation is very good. The word of mouth about her books whenever she has a new release is amazing.

OT- I nominated you for an award on my bloghere.

I love Elizabeth Hoyt and am sure I'll enjoy this one too.

Elizabeth Hoyt is auto-buy and auto-read for me! I love her writing!

I don't know what made me read this one first. I have Too Taste Temptation in my TBR pile. I am going to get to it soon, probably next month. I am really liking me some Elizabeth Hoyt. I believe she is now on my auto buy list :) If she writes it, I am reading it!

Elizabeth Hoyt is on my auto buy list as well now. I just read this book in the last few days during my forced blogging break, and I really really enjoyed it once again.